Food, land, people, and the road to Emmaus 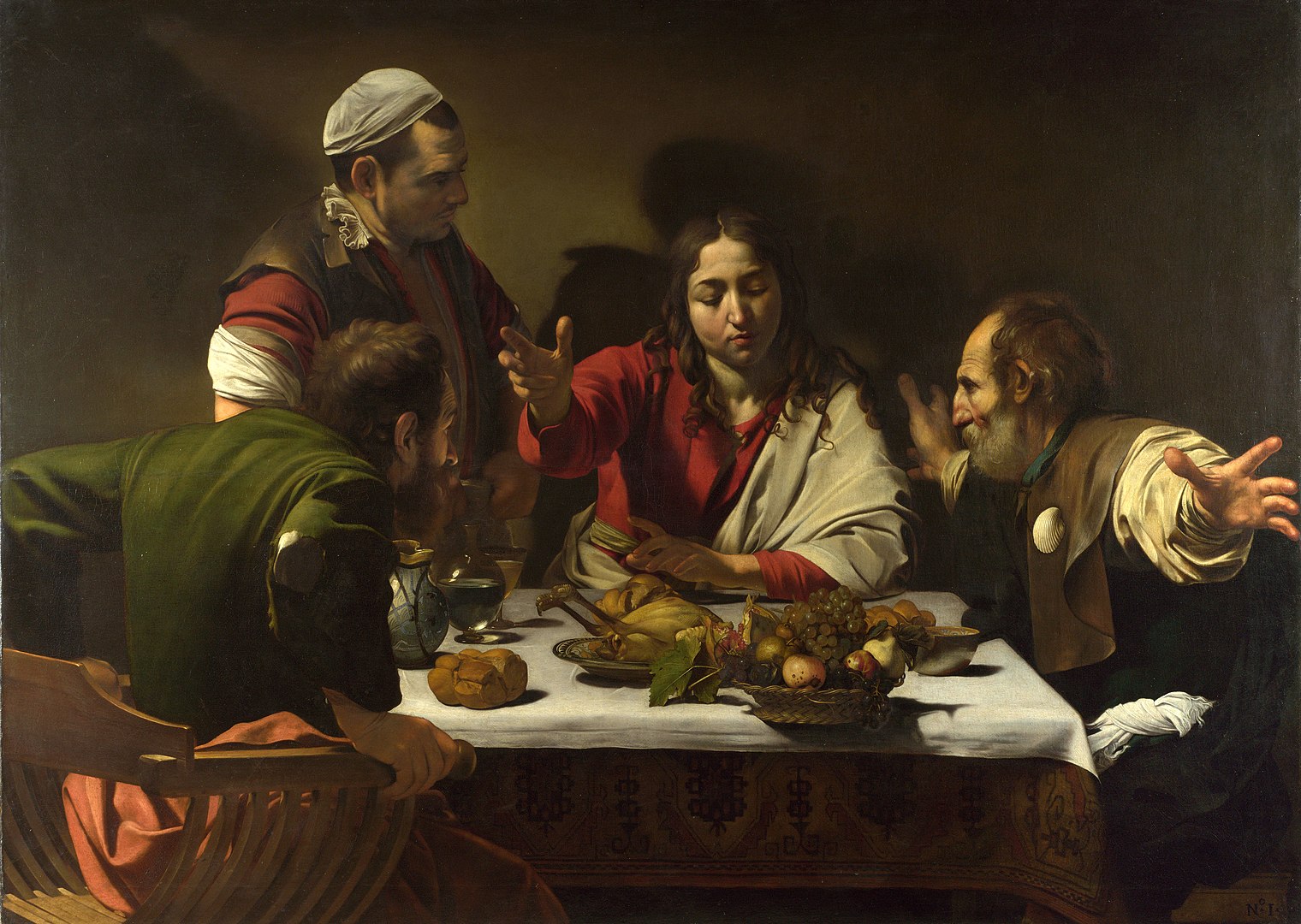 The Harvest Festival season is almost over, but not too late to offer some reflections on the meaning of harvest. Below is, therefore, a transcript of a harvest thanksgiving address I gave at Worcester Cathedral three years ago.

It’s always difficult to know where to start an address like this. So perhaps I might begin by stealing someone else’s lines, and quote the first words of Jorge Bergoglio on his appointment as Pope Francis: “Brothers and sisters, good evening”.

Of course, he spoke in Italian, which helps of course, and the thousands gathered in St Peter’s Square erupted in rapturous applause. I guess I’ll have to do a little bit more before that happens here!

But it’s an honour to be invited to speak at this special celebration, a celebration not only of the harvest, of the produce of the land and farming, but also, I suggest, of our county of Worcestershire.

I say ‘our’ county, although I am a bit of an interloper, but I hope not too much of one.

I live just two counties away in Monmouthshire, but on a good day we see the Malverns from the Kymin, the hill above Monmouth.

And the organisation I lead, Village Hope, which supports Christian mission in rural Britain, has its headquarters just next door in Herefordshire.

But I think am really here because for nearly 9 years, I have held an honorary position in the Centre for Rural Research, at the University of Worcester.

I trust that makes me a enough of a ‘stakeholder’ in this very special county to address you this evening.

This is a thanksgiving services and ‘thanksgiving’ implies we know what we are thankful for and who we are thanking. Our service has already made these clear, but I would like to dig a little deeper on those two points.

So, first, what are we thankful for? What has farming ever done for us?

For those who work in any part of the agricultural industry, as I did myself for many years, the answer is plain.

But why might wider society also be grateful for farming?

A while ago, we asked this question at the Centre for Rural Research. And we wrote a report on ‘Farming’s value to society’, which was presented to the Oxford Farming Conference. Our special concern was to understand what farming did for society beyond those things we can measure in money.

First, and most obvious, farming provides food.  British farming provides the major part of the diet for more than 63 million people, and we are still in 76% self-sufficient in the foods we can grow here.

But food is not just about nutrition, but about relationships; it is not just about consumption but about the connections it makes. As an American colleague Norman Wirzba wrote, “food is the most direct link we have between culture and nature, city and farm folk..  food is not simply fuel, but a natural, social, cultural and spiritual product”.

And an increasing number of people are concerned with where food comes from, how it’s produced and who produces it. We see this in the way fair-trade, free-range and organic foods and farmers markets, farm shops, and box schemes have really taken off in the last 15 years or so.

Second, farming shapes the land, and people in Britain appreciate this.

About 7% of them are members of a landscape preservation charity, and 16% members of environmental organisations.

Scientific research shows that people are up to 4% happier on farmland than in town, and that taking exercise in the countryside is much better for your health than taking the same exercise indoors or in town. (I wonder, did we need research to tell us that?)

And for centuries, British landscapes shaped by farming have inspired art, literature and music, including that of Worcestershire’s own Edward Elgar.

Third, farming is valued for its people.

Those of you who are farmers or know farmers can decide whether or not to think that’s true or an ideal that you would like to live up to. But the sentiments it expresses have not entirely disappeared.

People do still appreciate farming people and communities and indeed increasingly so.

More than a quarter of a million people visited a farm on Open Farm Sunday this year, the highest number ever, which prompted the organisers to describe public engagement with farming  in 2016 at an “all-time high”.

Perhaps the most telling statistic, however, is the more than 8 million people who watch or listen to a farming-themed television or radio program.

And, of course, the most popular of these by far is set in Worcestershire’s most famous village, although not one you can find on the map!

More importantly, we have woken up in the last few years to farming’s therapeutic value. There are now several hundred care farms across the UK, including Worcestershire’ own Wildgoose Training represented here today. And we know that care farming’s benefits are as much about contact with farming people as about working outdoors with animals and plans.

So, I hope I have persuaded you that when we celebrate harvest, we have much more than simply food to be thankful for.

But, what about the second question.. to whom are we thankful?

Certainly, we are to be grateful to farmers and all those behind the food, land and people that make up farming’s value.

Indeed, one of the reasons for our report  on ‘Farming’s value to society’ was to help farmers, who up until relatively recently felt somewhat unloved, to understand their own value and how much they were really appreciated.

However, at such an event as this, in a Cathedral that has been a place of Christian worship for 900 years (where after all we do ‘do God’), we recognise that ultimately it is to God, who made and sustains our world, and provides our need, to whom we give thanks.

Our first reading (from Psalm 104) provides a vivid picture of this.

God, the Psalmist declares, made all things and His creation reveals some of His wisdom and majesty. As another Psalm says, the ‘heavens declare the glory of God’.

And, he also sustains wild creatures and is concerned for their habitats – independent of any benefit to people. God, it seems,  is concerned with both production and preservation. He is both farmer and conservationist.

So God is the ultimate origin of the food, land and people that make up the value of farming I have just described.

And with the Psalmist, our response is praise and gratitude – “bless the Lord, Oh my soul, praise the Lord”.

But let me now turn to our second reading, the story of the road to Emmaus.

It starts with a walk in the countryside, through the farmland of the time. But it was not just any country walk.

For the last three years, Jesus had been healing the sick, raising the dead, feeding the hungry and announcing that the Kingdom of God had come.

He also had plenty of run-ins with the establishment, which eventually led to his mock trial and crucifixion.

But, two days after his death, he rose again from the dead and appeared to some of his followers.

But he had not appeared, as yet, to the two in this account, who had decided to return to what we assume was their home some 7 miles from Jerusalem.

As they walk and talk, Jesus joins them, but they don’t recognise him.

They explain how they had hoped Jesus would redeem Israel. For them, this meant freeing Israel from Roman occupation and restoring Israel’s national sovereignty.

The Gospel does not tell us exactly what Jesus said in response. But it does say He interpreted what we now call the Old Testament.

So we can surmise that He explained how the Messiah of Israel would redeem not just Israel, but the whole world.

And, as He says later before His ascension, ethnic Israel’s temporal redemption and restoration will come, but that must not concern them (as it would take another 2000 years). Their remit was first of all an eternal one, to preach the Gospel to all creatures, so that all who respond and believe, Jew or Gentile, can be saved, can have eternal life.

The two disciples were perplexed, dejected, traumatised. And, like any good counsellor, Jesus comes alongside them in their perplexity, walks with them, and enables them to face the facts, but from a different perspective.

In 1993, I was one of a small group who spent a week in Germany as guests of a Christian farming organisation. For some of the time, we attended a rural counselling conference.

The closing address was given by Roman Catholic priest who offered some reflections on this story.

He described how  the two disciples were people who had lost their past and had no hope for the future. But Jesus came alongside, walked with them and they were strengthened and able to look back on the past with new eyes and start a new future as new people.

His words left us with the challenge – to come alongside those in difficulty, for whom ‘hope deferred had, indeed, made the heart sick’ (and for us this was farming people) and bring to them the reality of Christ’s resurrection.

The outcome of that visit to Germany as the formation of what is now called the Farming Community Network. And, at least in the early days, our volunteer case-workers were known as ‘walkers-with’.

The climax of the story is not, however, the walk in the countryside, but a meal around a table.

For it was only when Jesus broke the bread at the meal table that they recognised him and were transformed from people without hope, for whom the day was almost ended, to people full of hope, for whom a new day had dawned.

As we saw earlier, food is not just about nutrition but about relationship, about fellowship. And here, in this account of supper at Emmaus, we see it most vividly.

And of course for most Christian churches, the centre of worship is still, after all, a meal – be it now a somewhat reduced one.

The Lord’s Supper, Communion or the Eucharist both looks back to the Last Supper and to the One whose body was broken for us at Calvary, but it also looks forward to that great harvest supper at the end of this age.

It is a meal that speaks of reconciliation with God and with one another, of renewal, of a new beginning.

So, when you enjoy a harvest supper, or indeed any meal, and especially when you share in Communion, it is my hope and prayer that you will not only give thanks to those who provided the food, to the animals and plants and nature from which it derived, and to the Creator and sustainer of all, but also that you will find in that meal a place of reconciliation with one another and with God, a place of renewal and a new beginning.

Learn more
PrevPrevious articleThe fragility of our walk
Next articleHerrnhutNext