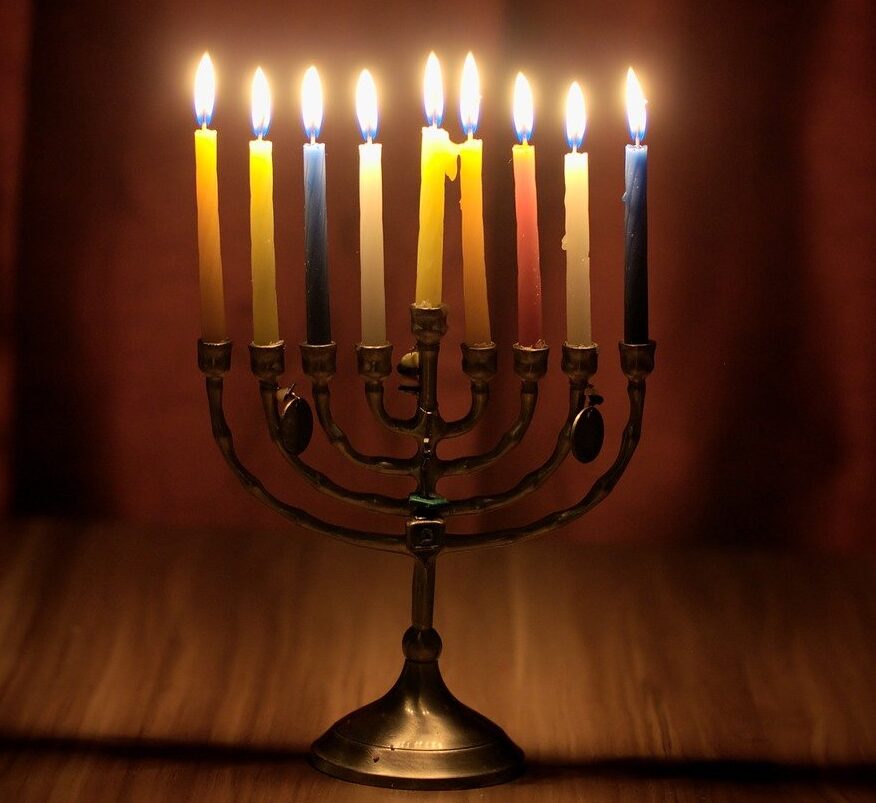 The Jewish festival of Hanukkah, or the ‘Feast of Dedication’, started at sunset yesterday and continues for eight days, until 18 December. Christmas  traditionally runs for twelve days concluding with the feast of Epiphany on 6 January. Both festivals take place close to each other in the middle of winter and sometimes coincide exactly.

Hanukkah commemorates the rededication of the desecrated Temple, following the liberation of Jerusalem by the Maccabees from the tyrannical rule of the Hellenistic king, Antiochus Epiphanes in 165 BC. The first day of Hanukkah is the 25th of the Hebrew month of Kislev (now, there’s a coincidence!).

The story is recorded in the books of Maccabees. Later, a legend arose that, when they were cleaning up the Temple, they only found enough oil to light the menorah for one day, but it miraculously lasted eight days, hence the Hanukkah menorah has eight lights. The festival is, therefore, observed by the lighting of an eight-branched menorah.

Jesus did not, of course, celebrate Christmas. But He did celebrate Hanukkah, as recorded in John 10:22-31. Hanukkah was a re-run of the earlier Feast of Tabernacles (because Antiochus had banned it). Both ran for eight days. Both were ‘festivals of light’, with the lighting of the big menorah in the Temple and of lights in homes. And Jesus’ teaching on the ‘light of the world’ took place around these two festivals.

Whether or not the eight-branched menorah was used in Jesus time, it is interesting that the tradition is to light the eight lights (one more on each day of the festival) from a ninth, which is usually higher than the others. This is the shamash or ‘deacon’ – the servant light that comes down to light the other lights.

Because of its origins, expectations of liberation were high at Hanukkah time – hence the interchange in John 10.

Hanukkah remembers and represents the putting away of the Hellenists’ humanism and paganism and a return to true faith, and, especially, a rededication of worship. In contrast, Christmas seems to have been a ‘Christianisation’ of the earlier pagan mid-winter festivals of Sola invicta on 25th of the Roman month of December and Saturnalia, which ran from 17 – 25 December, a process that has been running in reverse in our own times! So, maybe some ‘Hanukkahising’ of Christmas is not such a bad thing!

Is ‘dedication’ in the Christmas story? Yes! The coming of God into the world as a man starts with Mary’s, ’be it unto me according to thy word’ – with her dedicating her entire life to the fulfilling of God’s eternal purpose (Luke 1:38). That is when and how light and liberation came into the world. And if Jesus was actually born during the Feast of Tabernacles (for which there is a good case), then the Angel’s visit and Mary’s assent could well have taken place during Hannukah.

In our present turmoil, these two festivals of light, liberation and dedication, surely have a particular immediacy and special significance.

‘Blessed are you, Sovereign God of all, to you be glory and praise for ever! In the darkness of this passing age, your saints proclaim the glory of your Kingdom, revealed among us in Christ, our light.’

‘Blessed are you, Oh Lord our God, king of the universe, who has justified us through faith in Yeshua, the Messiah, the light of the world, and in his name we kindle the lights of Hanukkah’.[1]From- messianiclight.com/hanukkah

[A version of this article was first published in the Winter 2020 issue of Village Link, which is sent to subscribers by mail or email. If you would like to join our mailing list and receive this and future issues of Village Link, please contact us.]