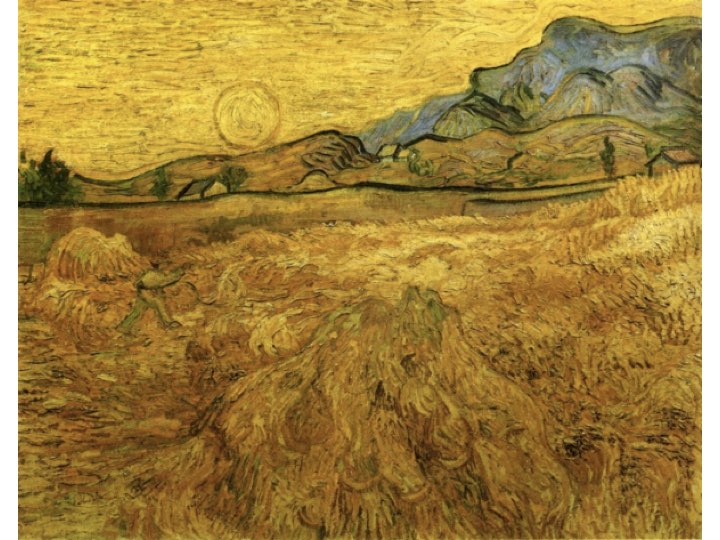 Just over six years ago, I was praying in a garden in Italy one morning and the phrase, ‘it’s the eleventh hour’, came quite suddenly to me. It is not often that I get a strong impression that the Lord is saying something, but this was one of them.

My first thought was of the imminence of Jesus’ return and the signs of his coming (Matthew 24; Mark 13; Luke 21). There was no sense of being given privileged knowledge of the exact timing of His coming and the ‘end of the age’. Only the Father knows this (Matthew 24: 36), and we should be wary of anyone who claims otherwise. But there is little doubt that the signs have intensified in the last decades, and even more so in the last six years, with Covid seemingly taking things to a wholly new level. Although the ‘end times’ were inaugurated by the life, death, resurrection and ascension of Jesus, and the signs Jesus described have marked the age since, scripture intimates, I suggest, that the ‘end of the end times’ will see the signs becoming more intense, more extensive, more frequent and more confluent.

Equally, I believe, the ‘eleventh hour’ was also referring to a more immediate meltdown –  a new ‘Dark Age’,[1]See Dreher, R. 2017. The Benedict Option, p 47. New York: Sentinel. or the ‘end of civilisation’ (which secular ‘prophets’ have been seeing for some while [2]For example, according to collapse expert Luke Kemp, “studying the demise of historic civilisations can tell us how much risk we face today. Worryingly”, he writes, “the signs are … Continue reading – and certainly this is borne out by the turmoil in church, nation and world in the years since.

In either case, the ‘eleventh hour’ is not a call to excessive speculation about the future nor lamenting that ‘things aren’t what they used to be’, but to biblically informed prayer, preparation and action.

Israel
In his book, God’s Tsunami (2006),[3]Tsukahira, P. 2006. God’s Tsunami. Word Productions.Peter Tsukahira (a leader of a messianic assembly that meets on Mount Carmel, Israel) describes how there are two hands on God’s ‘end-time clock’. Israel is the hour hand, “and it is approaching midnight and the return of the Lord”. As Jesus said, the Jews would be “led away captive into all the nations and Jerusalem will be trampled by Gentiles until the times of the Gentiles are fulfilled” (Luke 21: 24). 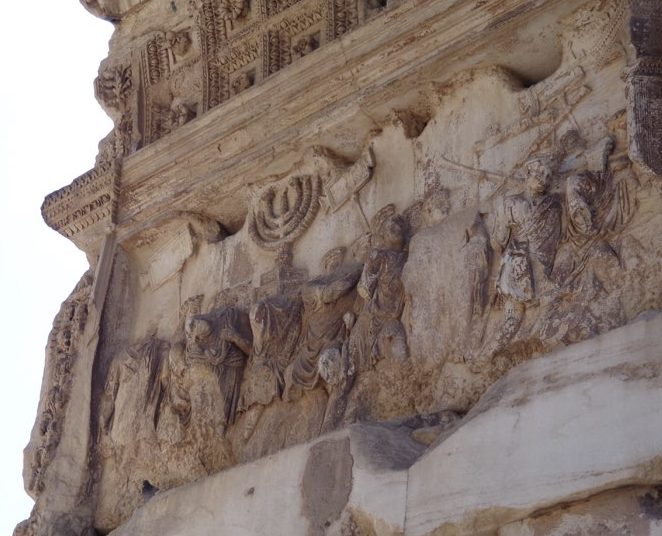 On the same trip to Italy that year, I visited the Arch of Titus in Rome. This depicts Jews being paraded as slaves and the Temple furniture being plundered in Titus’ triumph after the destruction of Jerusalem in AD 70, and provides a vivid witness to the fulfilment of the first part of Jesus’ prediction. Events in our own time, from the Balfour Declaration of 1917 and the San Remo Resolution 100 years ago last April, right up to the present, suggest that we have come, or are coming, to the ‘until‘.

The minute hand, however, is the nations. And, as Peter Tsukahira writes, “this has a few more revolutions to go before .. the world is ready for the Messiah’s return”  – although surely fewer revolutions now than when Peter wrote in 2006.

Harvest
In the same Olivet Discourse,  Jesus described a time to come that would be marked not only by great trouble, wars, famine, earthquakes persecution and deception, but also by the preaching of the “gospel of the kingdom in all the world as a witness to all the nations” (Matthew 24:14). Only then, He said, will the end come.

The eleventh hour is, therefore, a time of harvest. And on that day in Italy,  I was reminded of a Van Gogh painting (above) of a reaper working furiously as the sun sets to bring in a wheat harvest. As Jesus said, “the harvest truly is great, but the labourers are few; therefore ask the Lord of the harvest to send out labourers into his harvest” (Matthew 9:38; Luke 10:2). Our first imperative, therefore, is not to go or to send, but to pray. Then God sends and those who are sent go. As  Christian band Phatfish sung, “the hour is getting late, so many millions yet to hear’, Lord of the harvest send out labourers we pray”.

‘Two of them were travelling to a village’
The phrase, ‘the eleventh hour’ only occurs once in the Bible (see below). But there are several important events in Jesus’ ministry that took place late in the day. These include the feeding of the five thousand when the ‘hour was late’ (Matthew 14:15), and Jesus’ encounter with the disciples on the road to Emmaus (Luke 24: 13-35), when the day was ‘far spent’ (Luke 24:29).

The latter story has particular significance for us in Village Hope and to all involved with rural life, ministry and mission, as well as providing essential directions for all who seek to follow Jesus in our current turbulence. The account starts with Cleopas and his companion late in the day walking to a village. But not at that stage were they expecting to bring it hope. In contrast, they were people who had lost their past and their future, for whom hope had been deferred (Proverbs 13:12). But Jesus comes alongside them, and walks with them through the countryside and through their disappointment and perplexity, and begins to re-interpret their past, rekindle their hope and rebuild their future.

This echoes our concern to bring hope to villages and hamlets across the countryside of Britain. Like Robert Moffat, one of the pioneer missionaries of Southern Africa, we also have “seen the smoke of a thousand villages whose people are without Christ, without God and without hope in the world”. 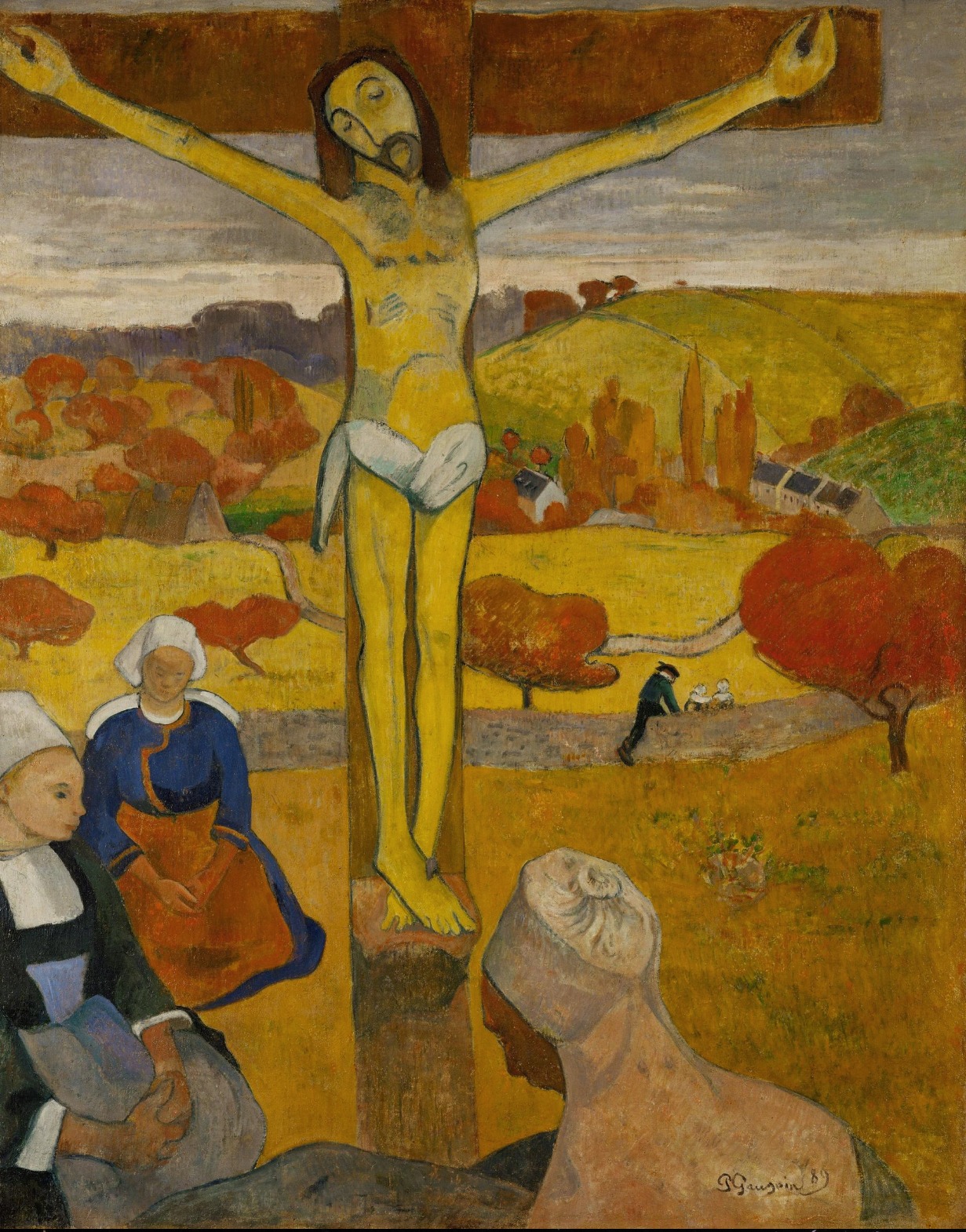 The painting to the left is the ‘Yellow Christ’ by Paul Gaugin. It was inspired by a crucifix in a small church near Pontaven in Brittany. There is also a copy of the painting hanging in the church, which is surrounded by fields and woodland. The painting depicts Christ on the cross in the midst of rural, peasant life. Whatever Gaugin intended, the painting speaks to me of Jesus being lifted high in the countryside, and bringing hope and salvation to our villages and hamlets.

We are aware of the need, but maybe this ‘eleventh hour’ is also a time of opportunity – God’s special time for rural people and rural areas, when the countryside can bring hope to the rest of the nation. Fans of Tolkien’s Lord of the Rings may remember the words of Elrond at the Council that formed the ‘fellowship of the ring’ –  “this is the hour of the Shire folk, when they arise from the quiet fields to shake the towers and councils of the great”!

‘In all the scriptures’
How, then, does Jesus rekindle hope in the two disciples? He expounds “to them in all the Scriptures, the things concerning Himself” (Luke 24:27). As Jesus opened His word to Cleopas and companion at that late hour, so for us also the ‘eleventh hour’ is a time to return to, and search, the Scriptures, to understand our times and to know what to do. As I have written elsewhere, a key to our future as believers in post-Christian (and Covid) Britain is deep commitment and close attentiveness to the word of God.

‘Abide with us’
The climax of the Emmaus Road story is not, however, a walk in the countryside, but a meal around a table. As they approached Emmaus, Jesus looked as if He would go on, but they “constrained Him, saying, ‘Abide with us, for it is towards evening and the day is far spent.’” (Luke 24: 29).

Jesus concurs, and as the day draws to a close, they gather around a meal table and a profound transformation occurs. Jesus was the same, yet different; continuous, but transformed. They recognised him, yet they did not. On the road, their hearts burned within them, but only when they gathered round the table, enjoying fellowship with Jesus and with one another, and when Jesus broke the bread were their eyes opened and they fully recognised him. In his vivid portrayal of the moment of recognition, the 17th-century painter Michelangelo Merisi da Caravaggio brought out this reality by breaking with the convention of the time and painting Jesus without a beard (below). 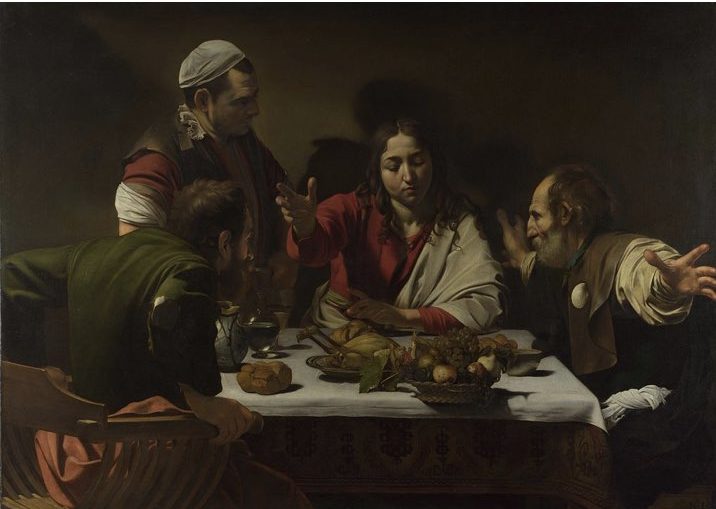 And the disciples are transformed too – from people without hope, for whom the day was almost ended, to people full of hope, for whom a new day had dawned. And they are immediately energised and mobilised and leave the meal table and head back to Jerusalem in the dark to share the good news that Jesus is risen.

At the eleventh hour, I believe the Lord calls us to a deeper intimacy with Him and a deeper fellowship with one another, including in homes and around meals. Indeed, Covid has shifted the locus of prayer and fellowship from ‘churches, congregations and communities’ to ‘hearts, homes and households’. Maybe this is God’s intention as He strengthens and prepares us for the days ahead.

Many Renaissance artists have painted their versions of the story of supper at Emmaus. None of them, of course, bear much relation to the historical reality, but then they do not intend to. I was particularly struck by Veronese’s version (below) in the Louvre, Paris, which shows the supper as a family gathering with children and even dogs! 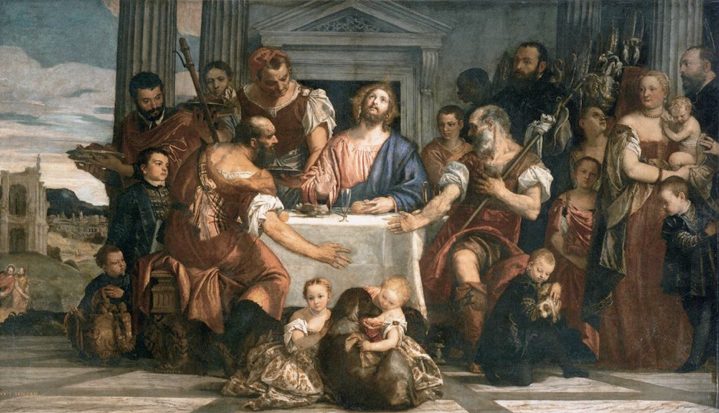 ‘At about the eleventh hour he went out and found others standing idle’
So, the eleventh hour is a time of harvest, a time when I believe God has a special purpose for his people in rural areas, a time to return to the Scriptures with new fervour, and a time for deeper fellowship with Jesus and with one another.

But let us turn finally to the only time the phrase, ‘the eleventh hour’, appears in the Bible, to the parable of the ‘workers in the vineyard’ (Matthew 20: 1-16). Although its main message is about how all who work in the Kingdom receive the same reward (of eternal life), what I believe God was drawing my attention to on that day in Italy was that, at this eleventh hour, He is recruiting ‘eleventh-hour workers’ for an ‘eleventh-hour harvest’.

How do you suppose those who were recruited at the eleventh hour felt? When the landowner came and asked them why they had been standing idle, they replied that no one had hired them.  They must surely have felt rejected and failures, or simply that they were not doing what they were meant to do.

I believe that the core of this message is that God is recruiting those who may feel they have been rejected, perhaps by society or even by the church, or who simply may not feel that they have yet done what God has called them to do. And they may be some of us!