The way of blessing 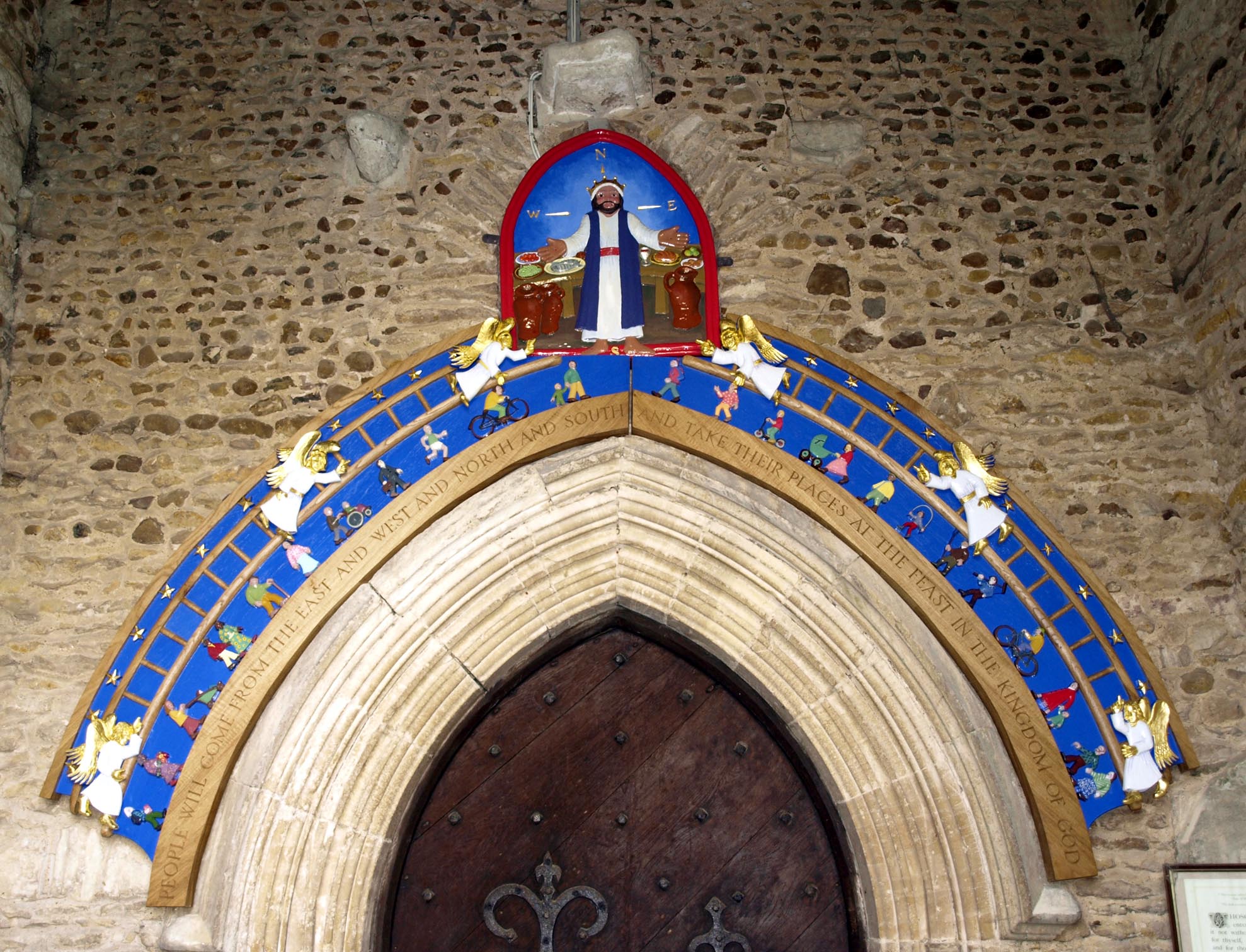 Last year, a friend introduced me to the Via Beata, the ‘way of blessing’. The Via Beata is a new pilgrim trail from Lowestoft to St David’s – the easternmost and westernmost points of Great Britain. The trail is interspersed with way-stations, consisting of biblically themed sculptures, sometimes inside wooden shelters (the installation above is at Bluntisham, Huntingdonshire). My friend had recently been part of a group that had walked the section of the trail in their own county, stopping to pray at each way-station.

I was intrigued, and visited the website and then made contact with the Via Beata’s founder, Steve Eggleton, a sculptor, wood-carver, designer and writer. In September last year, Steve and his wife, Gill, visited us en route to St David’s and I was able to ask him more about this unique project.

A personal pilgrimage
My first question concerned the beginnings of the project – what had led Steve to develop the Via Beata?

It was soon clear that, like the trail itself, the Via Beata has been for Steve a ‘pilgrimage’ with several ‘way-stations’. Through these, the Lord formed the vision that is now becoming a reality.

In 2000, Steve visited the ‘Seeing Salvation’ exhibition at the National Gallery – depictions of Jesus Christ from the 3rd to the 20th Century – and was moved, not only by the exhibits, but also by the reverence evident in many of those viewing them. It prompted him to realise that art can reach some people in ways that words cannot, and that he, as an artist himself, could be part of making that happen.

A couple of years later, Steve designed a memorial pavilion for a cemetery in  Hampshire. This consisted of eight relief carvings that speak of hope in Christ. Many people lingered at the site and contemplated and were touched by its message. This prompted him to pray that there would be more such installations around the country.

A further impetus came in 2005 when Steve was designing a sculpture trail for a country park in North Wales and glimpsed the possibility of something bigger.

These incidents built up a longing to do something specific with his own artistic gifts to touch the people of Britain with God’s love and God’s word.

The, one morning in church, in 2006, the preacher asked everyone to write a short personal ‘mission statement’. Immediately, Steve wrote ‘through creativity, blessing’. And he felt the Lord showing him a straight line across Great Britain at its widest point, with art-works that spoke of Him stretching away into the distance.

Nevertheless, it was another two years, and a further prompt in church, when the preacher urged the congregation to ‘seize the day’, before Steve took steps to make this vision a reality.

The vision confirmed
Conscious that the Lord does not, as a rule, expect us to do His work alone, but has called us into a many-membered body, Steve’s next step was to write to about twenty friends asking them to pray and seek God’s guidance regarding his emerging vision.

Two days after mailing these letters, a person in a meeting had a picture of a piece of wood coming in on the tide and someone taking it up and carving it. Steve realised that the Lord was speaking to him. This was confirmed, as many of his friends wrote back encouraging him to press on with the plan he believed the Lord had revealed to him.

Further confirmation was provided when he drew a straight line on a map from Lowestoft to St Davids  and discovered that the line went right through his own garden! In 2009, this became the site of the first way-station.

Since then, a further seventeen way-stations have been installed and fourteen more are in progress. And a community has formed around the project, including other artists and craftsmen, those identifying way-station locations and liaising with local believers, local churches hosting way-stations, and some simply walking and praying along the trail.

Rural blessings
A particularly significant aspect of the Via Beata is that nearly all the existing and planned way-stations are in villages, rather than towns or cities. I was, therefore, very interested to know, ‘how has the establishment of these impacted and blessed people and churches in rural areas?’.

As Steve and his team have travelled the Via Beata route, they have encountered many small rural churches and met many leaders who are struggling or feel isolated, and listened to their concerns and prayed with them. Shortly after returning from their recent trip to St David’s, several church leaders in the villages they had visited on the way (in Wales, Worcestershire and Warwickshire) wrote, speaking of how they were encouraged and inspired by the visit and the Via Beata vision.

The project has been most effective, however, where local people have got involved in making the art-work for their village. This has provided opportunities for workshop weekends, which usually include a church service of one sort or another. And when the work is complete, there is a service of blessing to commission the way-station.

For example,  at the village of Bluntisham in Cambridgeshire, a carving workshop weekend in the church room included a Sunday morning cafe-church outreach attended by several local families. A second weekend, a month later, when the figures made during the first weekend were painted, involved many more local people, some of whom had never attended the church before. And a service at the end to commission the way-station was packed, and provided a great opportunity to preach the gospel. The local church now plans further follow-up.

There are also many individuals who use the way-stations regularly as places to be quiet, some of whom are happy to have local Christians speak and pray with them.

Reflections
As I reflected on the story of the Via Beata, several themes emerged, which may provide signposts on each of our own journeys and in our journey together as God’s ‘pilgrim people’.

For believers, this means, seeking to discern what God is initiating and blessing, ‘seeing what the Father is doing, and doing likewise’, as did Jesus Himself (John 5:19).

‘Through creativity, blessing’. Not everyone responds readily to arguments and propositions. Beauty (and goodness) can touch people when words fail. Creative expression and good people are an essential apologetic for our faith and a signpost to lead people to Jesus. Out of concern to avoid any hint of the worship of images, evangelical churches have tended to focus on words alone and stripped worship and church life of any visual art and creativity. In doing so, maybe we have thrown out the baby with the bath water?

‘Using our gifts’. A central theme in Steve’s story above is how the Lord made it possible for him to use his artistic gifts for the Lord’s work. Not all of us are artists, but we all have God-given gifts, which we are to use to worship and serve Him and others. In the final account, it is what we have done with the talents the Lord has given us that matters (Matthew 25:14-30). For individuals, this means discovering our gifts and calling and seeking to find ways to deploy them. For church leaders, this means recognising people’s gifts and creating contexts and platforms for them to be expressed and used.

‘Between the way-stations’. The account above has necessarily majored on the way-stations, as the central focus of the vision that the Lord revealed to Steve and which he has taken forward. However, for those walking and praying the trail, most of the time is spent between the way-stations, amidst the beauty of God’s creation in the British countryside. As well as well-attested therapeutic benefits of outdoor exercise, like art, but more so, God’s creation expresses God’s glory (Psalm 19) and His ‘eternal power and Godhead’ (Romans 1:20).

‘Pilgrims on the earth’. Finally, the Via Beata reminds us that we are all ‘pilgrims on the earth’ on a journey to a ‘better, that is, a heavenly country’, to the ‘city God has prepared’ for us (Hebrews 11:13-16). And through all the twists and turns and ups and downs, with Jesus alongside us always (Matthew 28:20), and the great cloud of witnesses surrounding us (Hebrews 12:1), that way is surely a ‘way of blessing’ for all who follow it.

Blessed is the man whose strength is in You, whose heart is set on pilgrimage. As they pass through the Valley of Baca, they make it a spring; The rain also covers it with pools. They go from strength to strength; each one appears before God in Zion. (Psalm 84:5-7).

This article was originally published in the Winter 2019 issue of Village Link.

Learn more
PrevPrevious articleCovid 19. In your patience, possess your souls
Next articleCovid-19. A door of hope?Next